We are beginning to make progress with clearing out all the old clutter.  At the weekend, OH went through a box of old camera equipment to sort out what he still wanted.

We’re not very good at throwing stuff out, so we had a complete timeline of compact cameras from around 1985 up to the present day – groan.

I was feeling ruthless – I want the stuff out of the house as soon as possible and was busy binning old film cameras which we will never use again.  Bee reached into the bin, pulled out my late 80s compact camera and and told me that ‘hipsters’ like walking round with old fashioned cameras even if they don’t work. 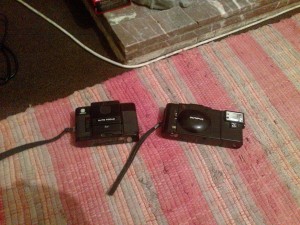 I didn’t believe her, but OH got on the internet and to my amazement Bee was right – on ebay, our two cameras could fetch between £100 to £140 between them.  OH’s job for this weekend will be to put any bits and bobs on ebay, and we’ll see how we get on.

How have you got on with selling stuff on ebay?