I’m still busy tring lots of things for the first time, and this week it was making marmalade.

Last weekend, we were in the market when OH spotted some Seville oranges – I bought a big bag (2kg) for £3.50.  I had enough oranges to make two batches of marmalade, and used two different recipes from the River Cottage Preserves book.

I made the first batch using the whole fruit method – basically you leave the fruit whole and boil it up for a couple of hours.  You then scoop the pips out with a fork and slice the fruit (trying not to burn your fingers), return it to the pan and boil it until it reaches the setting point (about 20 minutes).  Unfortunately I misread the instructions didn’t let it boil for long enough and it didn’t set – I had to return it to the pan for another 10 minutes.

I made the second batch with the sliced fruit method.  With this, you squeezed the juice out of the fruit, slice it and then add it to a pan with the juice and water, leaving it to soak overnight.  You then boil it for a couple of hours, before turning the heat up for 20 minutes until it reaches the setting point. 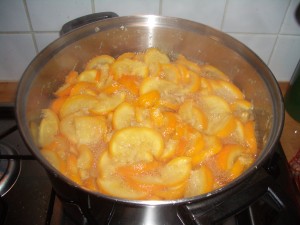 Here are the results – I’ve got around 12 jars of marmalade. 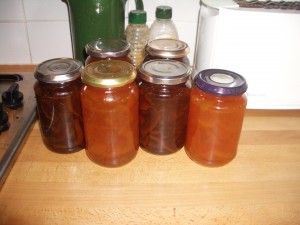 Have you made marmalade?  How did you do it?