As you will know if you’ve read this blog for a while, I really like making jam.  I made some marmalade a few weeks ago.  I have found on occasion that my pans, even my biggest pot, aren’t really big enough for jam making.

At work I mentioned to colleagues that I was thinking of buying a jam pan, and one of them suggested Freegle.  Another suggested I put an advert on the internal ‘Swap shop’ intranet message board.  So I did, asking if anyone had a jam pan they wanted to sell.

A couple of hours later I had an email from somebody who had an old jam pan in her garage and she was happy to let me have it for free!  Here it is: 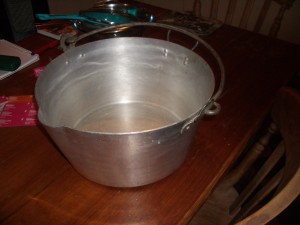 I hadn’t thought of looking on Freecycle and similar sites before.  Now I will also be looking at what I can give away where I want it to go to a good home.

Have you managed to find something you wanted on Freecycle or similar?